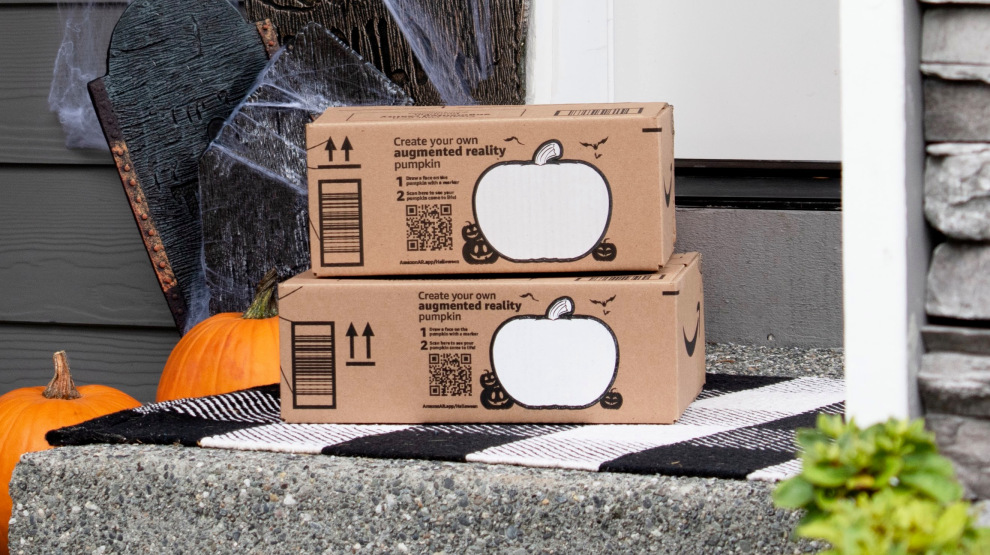 Amazon has quietly launched a new augmented reality application that works with QR codes on the company’s shipping boxes to create “interactive, shareable” AR experiences. Called simply “Amazon Augmented Reality,” the retailer describes the app as a “fun way to reuse your Amazon boxes until you’re ready to drop them in the recycling bin.”

As shown in the App Store’s screenshots of the new app, different Amazon boxes will offer unique activities for the AR experience. For example, one screenshot shows someone drawing the face on a pre-printed white pumpkin to turn it into a jack-o-lantern. When they then scan the QR code, the pumpkin jumps out as an AR object. Another screenshot shows an AR pumpkin and bat wings over top an image of a dog. And one shows the Amazon box turning into a little blue AR car when the QR code is scanned.

In the accompanying App Store video, there are other animated characters, including the Amazon smile logo itself an an AR corgi dog that jumps out playfully when the QR code is scanned.

The company notes in the description that if your iPhone is also capable of TrueDepth technology, the app can also use the device’s camera to track your facial movements to enable features like a “selfie” mode.

The app, which debuted a few days ago on the iOS App Store and Google Play, offers no other functionality if not used alongside an Amazon box that supports the new QR codes. (However, you can test out the experience here if you don’t have a box to use.)

At launch, however, the app appears to focus only on the pumpkin AR experience. Once you have designed and scanned your pumpkin into AR, you can then press other buttons to decorate the pumpkin further — by giving it a hat or outfit, changing its light or color, among other things. You can also flip the camera around to display the pumpkin on your selfie image, where it moves along with your face. You can then press the Camera button in the app to snap a photo of your creation to share on social media.

The new QR code-enabled boxes are only beginning to roll out now, so you may not have received one just yet, we understand. The boxes are also made using less material, as part of Amazon’s ongoing “Less Packaging, More Smiles” campaign.

Amazon has been dabbling in AR for some time, most recently with the launch of a new AR shopping feature that allows users of its main Amazon shopping app to visualize multiple items of furniture or decor in their room at the same time. A few years ago, it had also launched a simpler version of AR shopping with a feature called AR View in its Amazon iOS app, built using ARKit. It had also once tried out “shoppable stickers” that used ARto place basic stickers of products in your space, instead of realistic representations of the items.

With its latest launch of the AR View feature, however, Amazon had done the work to support Apple’s latest version of ARKit and likely wanted to experiment further with the possibilities. The box-scanning AR app could serve as a way to test consumer demand for more AR products. But Amazon doesn’t appear to be using this app to collect extensive research data. The App Store description notes that all the information processed using the new technology in Amazon’s new AR Player will remain on the device, and is not “stored, processed or shared by Amazon.”

How it WorksThe PlatformPricingFAQsBlogRequest a DemoContact Us
Follow Us